Do I really need magnetic dirt separation in my hydronic system?

The short answer is – yes!

Almost all hydronic systems have at least one wetted component made of cast iron or steel (pump volutes, expansion tanks, etc.).  All hydronic fluids also contain some amount of air and we know when oxygen, water and iron (or steel) come together the result is corrosion (iron oxides), some of which is magnetite.

Magnetite is a naturally occurring material, is black or brownish-black with a metallic luster that can be seen in rocks and black beach sand, and has a Mohs hardness rating of 5 to 6 which is equivalent to a knife blade or glass. Magnetite material found in hydronic systems looks like extremely fine sand, almost like a black sticky powder. It’s nasty stuff.

Magnetite gets into tight spaces such as valve seats and packings, and wetted bearings, for example, where friction can cause wear, seizing, leaking and mechanical failure.

Today’s ECM pumps contain strong permanent magnets in the rotor; we’ve seen buildup of magnetite in the wetted rotor/canister sections of ECM circulators that have stopped pumping. Not good.

Also, magnetite can settle out and build up on a surface in a boiler or chiller heat exchanger or an emitter. When this happens, it acts as an insulator and significantly reduces heat transfer and system efficiency. The heat exchangers in today’s highly efficient, chillers and condensing boilers are very sensitive to fouling. Reduced efficiency and failure there gets expensive! Non-condensing boilers are also vulnerable to build-up. If there is no method of separating the magnetite, the bottom of the heat exchanger is where magnetite can collect and cake-up. 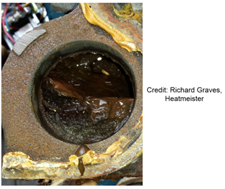 For an  in-depth look at iron oxides, a special type of debris that forms to some degree or another in all hydronic systems, take a look at our Coffee with Caleffi webinar archive:  Magnetic Separation in Commercial Hydronic Systems.

Send us your questions, comments, and feedback; we would love to hear from you!

If the system is properly treated with a chemical protectant, it would not be necessary. However, it is some of the cheapest insurance that can be installed in the system.
How many times have we all seen systems that were installed correctly, filled with good water and proper chemical protection; then some part fails, the system gets drained and the owner and/or in repair person just fills it up with potable water and walks away, setting up the potential for all sorts of failures.
Install the dirtmag!

Good point Jim, the added price for the magnetic feature is pretty cheap insurance. The list add for Dirtmag separators (1" to 6" ) runs between 15% and 20% over standard Dirt separators. Here's a 3" installed. Have a good weekend.

Yes, the SEP4 is steel inside, however it's still a good choice for your system. With the oxygen in your system there will be corrosion, no getting around that. You may want to add one of the popular water treatment chemicals that scavenge the oxygen, to keep corrosion to a minimum.
Kevin