DIRT AND AIR CAUSE PROBLEMS FOR THE HEAT GENERATORS

Current regulations have greatly stimulated replacement of some domestic thermal system components, such as heat generators. In recent years, boilers in particular have undergone considerable development, passing from conventional systems to condensing systems, resulting in an evolution of their internal components.
However, boilers are often installed in old systems that no longer function optimally, creating numerous issues for the generator due to several factors. One of the most important is related to the impurities that the water in the circuits contains, which can create a range of problems for the heat generators, including:

Not even the problems related to the other components of the heating system should be underestimated, such as:

The boiler and the domestic system in general can be protected by installing a dirt separator, which combines normal system cleaning with the great benefit of depositing the impurities in the lower part so that the flow characteristics of the device do not vary.
Installing this type of device requires a specific space, which is not always available, especially when the boiler is installed in the kitchen.

The Caleffi XS® under-boiler magnetic filter solves all the problems related to protecting the boiler and thermal system with a compact design that has no equal on the market.

In domestic systems, the boiler is very often installed in the kitchen, sometimes inside a wall cabinet or more often exposed. When replacing old boilers, they are connected to the wall connections with hoses; in these circumstances, the need to add other functional components (such as dirt separators) is not fully in line with interior aesthetics.

With its smooth lines, chrome plated and white plastic parts that match the colour of the boiler shell, Caleffi XS® has minimal impact and is pleasing to the eye. Its compact dimensions further help the component to be unobtrusive in the domestic environment, letting it go almost unnoticed.

Cleaning devices must be installed in the return pipe to the heat generator, so that they capture the impurities before they can reach the heat exchanger and circulator and damage them; the Caleffi XS under-boiler magnetic filter mechanically separates the impurities in systems using a triple effect: a steel mesh strainer (mesh size Ø 0,80 mm) for the light non-ferrous particles, a powerful neodymium magnet for the ferrous components, and a large calming chamber to collect the heavier particles. The chamber has transparent windows, allowing the user to check if the internal elements need to be cleaned. 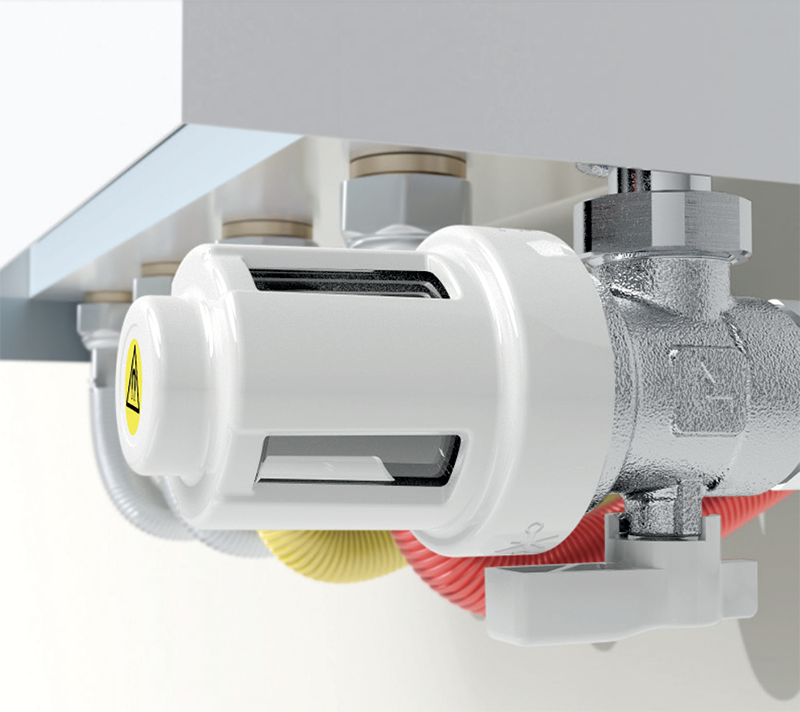 The transparent windows make it extremely simple to check if the component requires maintenance. Cleaning can be done by following a few simple steps.

Caleffi XS has a built-in shut-off valve; switch off the boiler and then close this valve and, without the need for any tools, unscrew the white cover with the magnet (2); the impurities will fall into the collection chamber (3), and you will be able to remove it from the rest of the valve.

Cleaning the components is immediate (4), while refitting is simple and foolproof.

Using these products in domestic systems is often cumbersome, if not quite impossible. Caleffi XS has a specific adapter, which allows the additives to be dosed into the system very simply and quickly. After closing the valve and removing the impurity filtration and separation chamber, connect the adapter to the valve, followed by the canister of chemical additive (C3 Cleaner Fast or C1 Inhibitor Fast). Then open the valve and inject the pressurised liquid.